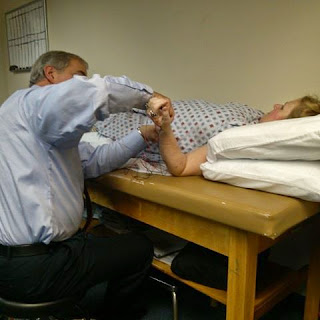 I was expecting to go to the dentist this morning when the phone rang at 9 a.m. It was the doctor's secretary who travels from Pittsburgh to do EMGs for the residents of Elk County since we don't have a specialist here. I was scheduled to have the test next week, but didn't hesitate and took the available slot this afternoon. I then called the dentist and rescheduled. EMGs involve sticking needles in your muscles and nerves and zapping them with electricity to see if they are damaged or blocked. This will be my third one.

For those who don't know, I've had trouble with my left leg for months before the surgery in February to repair the torn meniscus and it has only gotten worse since then. Also my lower back has hurt for many, many years. I had an appointment with the knee surgeon last week and he feels that the pain problem is I have a nerve damaged or blocked somewhere between my lower back and calf of my left leg, but it has nothing to do with his surgery. (Naturally) He wanted me to have the EMG to find out where the problem is. It might require further surgery. Great, just what I don't want. He put me on nerve pain medicine. I take it at night and it knocks me out. Once I take it, I have maybe a half hour, then I'm finished until the morning. Then I'm exhausted all day as well.

Today's test was even more painful than the two I had done on my left shoulder and left arm. When he stabbed the needle into my thigh and pushed with all his night and zapped me, I thought I was going to lose what's left of my mind. Even worse, he had to do that particular one twice. It could have been three times, because by then I was almost passed out. The pain was incredible and I wouldn't wish it on anyone but my absolute worst enemy and she deserves even more pain after what she did.

I asked him what the results were and he couldn't tell me. I so hate that. Why not just let me know? They are MY test results from MY body aren't they? Anyhow, he said they would be sent to the doctor on Thursday and I should expect a call from the doctor next week. I don't have an appointment with him for at least 4 or 5 more weeks and told him that was too long for me to wait. Patience is not a virtue with which I was blessed. He said not to worry, he was sure I would get a call next week. What would you think that meant? Now I'm sure there is a damaged nerve somewhere and that has me freaking out. I hate this! If the surgeon hasn't called me by Friday of next week, I'll call my family doctor and see if he can get the results and tell me if there's something to worry about.

I'm so tired of waiting for the next shoe to all!
Posted by Gretchen at 6:27 PM No comments: