Hubby and I grew up with families who took yearly family vacations as well as other trips throughout the year. My family always took a trip with our four, plus Mom's two sisters & their families, their parents and Grandma's sister and brother~in~law. I was raised to love all generations, so it was nothing for me to include others in our vacations or day trips.

Our first granddaughter was born last year and we couldn't imagine leaving her behind. It started with local carnivals when she was one month old when we drove three hours each way to pick up her uncle Trevor and Aunt Ana from the airport when they flew in from California to be her godparents, then at two months, Randy and I took her to the local carnivals because her mother had to work.

Randy went all out for her first birthday and booked a week in Ontario, Canada. We had a hotel facing Niagara Falls, so she got to wake up seeing the Falls and go to sleep seeing the lights on the Falls. Incredible! She shopped til she dropped more than once. Her best stuffed friend was included in all the photos. For Mothers' Day, we drove up to Bloor Street in Toronto and I got my first Louis Vuitton purse. It was a trip to remember.

We headed to the West Coast later that summer and spent a week with our son. Universal Studios was nice, but I wouldn't do it again. There wasn't enough for a one-year old kid and I was in a wheelchair at the time. We loved our day trip to Tijuana and visiting friends there. Truly the kindest people around.

Our little one gave us no trouble on the planes, even when we were in our seats for hour at a time. We brought along her carseat and she mainly slept on the many flights and layovers. Once we hit San Diego, she headed straight for the ocean. Children are pretty flexible and I can't understand why people think international travel with babies or kids is a nightmare. How will your child ever learn if they don't travel?

Anyway, just random thoughts. Hope everyone has great trips planned!
Posted by Gretchen at 5:19 AM No comments:

I just booked a quick day trip to NYC for hubby and myself as a Valentine's present. We'll hop on a bus early this Saturday for way too many hours, have 6 hours in Times Square, then back on a bus and get home early Sunday.

Here's my question: What is the top can't miss things to do and the top don't even think about it list?

We've talked about going on a trip there for years and have our camera equipment, but have no idea where to start. We want to make the most of the time we have. I'm open to suggestions. Please help!

The biggest problem is I'm disabled and walking fast isn't possible. I'm not spending our first trip there in a wheelchair, so that's out, too.

Posted by Gretchen at 5:08 AM No comments: 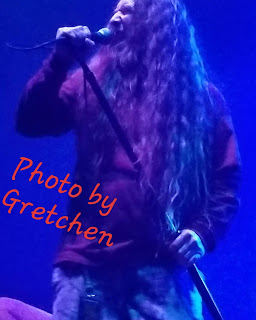 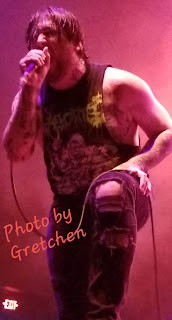 It was an experience we never had before and while I'm glad I went, I kinda doubt we'll go to another one at that venue. I've been to *many* concerts, but nothing like this. Rushing security gets people kicked out, there it's just weight lifting for security. The same people flew over time after time. Strange night.
Posted by Gretchen at 3:37 AM 1 comment:

I do mean to blog daily or at least weekly, but then life happens. Funny how that works. If I believed in hell, I'd say that good intentions send you there.

Maybe it's easier to just add a few photos under a cutline? I'll try that, but at least it shows I'm alive. Just a few things I love: 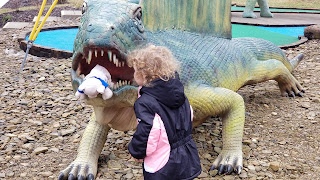 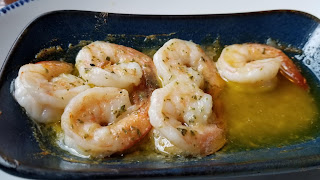 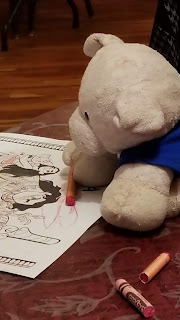 Posted by Gretchen at 4:06 AM No comments:

I had the time of my life and knocked the top of my Bucket List off all at one time!

I got to meet my favorite band Disturbed, got photos and an autographed guitar!! It was such an incredible experience!! They were kind, sweet and humble. I danced the night away with mein Leibchen and will never forget a second. 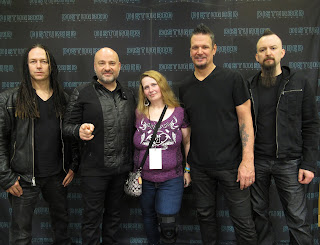 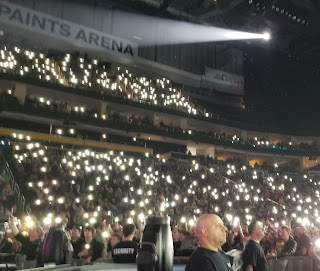 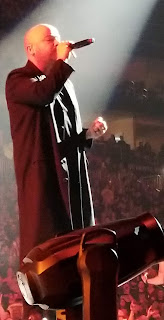 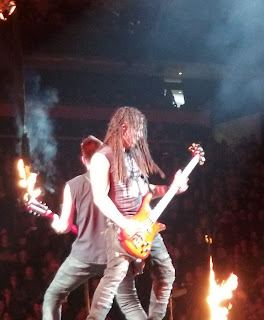 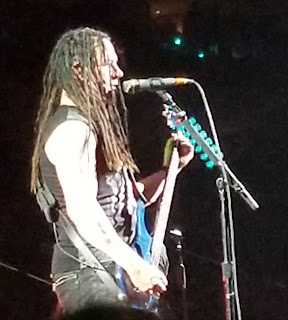 Posted by Gretchen at 4:05 AM No comments:

Searching for a 30th wedding anniversary trip to NYC

My husband and I have been together my entire adult life and in August, we'll celebrate our 30th wedding anniversary.  Where did all the years go?

Our current dream trip is a weekend in NYC. We want to have a guided tour our first time, so I'll begin the research necessary to give the safety of a group, but enough flexability to see and do what we want ~ Statue of Liberty, Hard Rock Cafe in Times Square, riding a double decker tour bus and a Broadway show. Of course, souvenir shopping for my family is important as well.

I'm asking my readers for any ideas or suggestions on trips they've made. Is it safe to be out at night? Best hotels to use? Best tour companies. Any tip will be gratefully appreciated.

We have until August when our anniversary hits.

I'm ready to take a bite out of the Big Apple.