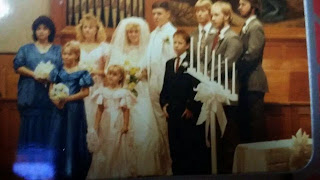 In a hotel not very far away from our current home, I woke up for the first time as Mrs. Randy Rokosky. WOW! Where did my other name go? We got together literally 2 days before I was leaving for college in upsate NY. He was a US Marine stationed in NC and had been one since he graduated from high school. He was home on leave. We knew each other from school, he was 2 years ahead of me. We were friends and had a lot of the same friends. He was even our paperboy and lived just a few blocks from me! We worked on chemistry homework together a few times in high school and went for drives. Just friends, except for one time he kissed me. I NEVER forgot that kiss. It was one of those kisses that goes right to your toes, but he had a girlfriend at the time and was leaving for boot camp, so it didn't go any further that time.

My mom said she always knew he would be back some day and it would be forever. I honestly never expected it. My dearest friend and I were uptown, just spending the last weekend of our time together. She was leaving for cosmetology school in Erie and I would be in NY. I also had a boyfriend at the time, but when that dashing Marine looked at men and asked if I wanted a drive home, that was it. I couldn't imagine being with any other man. I got more of those toe~curling kisses. I had to break up with my long~time boyfriend that night. It wasn't easy and he was furious, wanted to come down and beat up my soul mate. I told him to just let it go. He didn't have a chance, it was over.

Randy and I wrote and called constantly and I finally flew down for a weekend visit. I had never been on a plane or traveled alone before, but he was worth the fear I had. He drove home for weekends as often as he could and when I didn't fly down there, I took the bus. Being a very tiny, size 1, blonde girl traveling all alone to the South was scary at time, but I had my Marine and those kisses to think about.

We had fun when we were together, so when he asked me, "Will you marry me?" There was no way I could say no. We were so young! I was 20 and he was 22. I couldn't even buy a drink, but I could get married. I have been with him my entire adult life and even though it hasn't always been easy (nothing that is truly worth it is ever easy, is it?), we are still together and I'm still getting those kisses.
Posted by Gretchen at 4:25 AM