The next step in my transformation towards becoming Borg

It looks like I'll be having another surgery before too long. Back in April, my neck was fused because I wasn't able to use my left arm. I had a herniated disc and fell. The disc moved and pinched the nerve and it went numb. The surgery was supposed to have me better within 6 months. It's been those months, but my neck still isn't better. We were warned that could happen and I would need more surgery. I have no problem with things happen. My whole life has turned into "THINGS HAPPEN." I try to just go with the flow.

The neck surgeon sent me for a CT scan last week and it wasn't conclusive, so we decided surgery is a very real possibility, he wanted a MRI to see how bad my neck is. One disc was fused then, but now it's a possibility that it will be three disc. He'll go in and remove more bone, give the nerve more room to keep It from being pinched, add donor bone (THANK YOU DONORS!!!!), then add rods and screws to hold me together. Go ahead, I've heard all the Borg jokes. Resistance is futile, I will be assimilated! 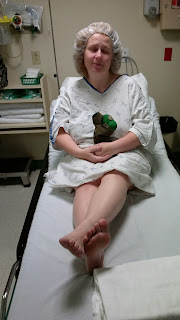 Then there is my knee. I had surgery at the end of February to repair a torn meniscus. No worries, I'll be fine a couple weeks. WHAT A JOKE! I can barely use my lower leg most of the time. Why? According to another doctor, the nerve was CUT! The knee surgeon says it's only pinched and he was going to send me for a MRI and go from there. It's been a month since then and not a word from the office. I called and ripped them a new one. I know it's not nice, but I have no confidence at all in him or his staff. The secretary claims that their "phones were having trouble for the month." Can you believe that smoldering pile of horse droppings? Everyone has a cellphone. If it's an important issue with a patient in horrid pain, use hour cellphone! Besides, it's a hospital clinic. There is no way in the world that a hospital would allow one of it's clinics to go without working phones for a month!

Since then, we have new insurance, so she has a new company to call. I admit it, I was not the nicest person to her. I told her straight out I thought she was lying. The connection ended then. Hmmm That awful phone system at work? She calls me back. What happened? You hung up on me, lady. "I would never hang up on a patient." RIGHT! I have no such worries and have and will continue to hang up on people. My mother was here, so I couldn't tell the secretary what I thought of her skills and those of her boss. He was in surgery yesterday, so I let them have a day and expect it returned today. Give me the MRI. I will get the disc and the radiologist's report and find a new orthoscopic surgeon. Everyone has urged me to get a lawyer and sue him for malpractice. I fully intend to do that if I don't get a call today with an approval for the knee MRI, I'll make another call. I also know the hospital's CEO as well as their top doctor. I will never allow anyone to do surgery or any test on me without a second opinion.

To tell the difference between the two surgeons, Pittsburgh (where my neck surgeon is) called for the MRI approval on Friday when I left. It was a 3-hour drive home and when we go there, the insurance company had already called with the approval. That's less than 3 hours! There is NO reason for a professional to take a month to get an approval or at least call me and say they are having problems.

If I have to go to the knee doctor's office, I'm afraid to think what my mouth won't be able to hold back. I married a Marine and spent years learning some very "colorful metaphors!" I have no trouble using them. When low~life telemarketers call me, I have had some of them so upset they couldn't even think of a response to me. That's skill! :-)