You shouldn't be ashamed to have a mental illness

It's 2016 and you would think in this "enlightened" age people would understand that a mental illness isn't contagious or the person's fault. People shouldn't be ashamed to seek treatment, but they do. With the right combination of therapy and medicine, the person can live a close as possible to normal life. I have seen the devastation a mental illness can have on a person's life.

General Hospital is currently featuring a storyline about a 20-something young man who has just been diagnosed as bi-polar. The young man's father also suffers with that and the raw emotions shown that he passed his mental issues onto his son were heartfelt. The son was resistant to even going to be diagnosed because of the stigma. Once he lost control and almost hurt his girlfriend, he agreed to see the psychiatrist. The actor is showing how once the diagnosis was made, he had to start taking medication daily. He shows how the medication makes him feel like a zombie. He feels dead inside and just wants to be normal.

I talked about the stigma of having a mental illness, but it is no more the fault of the person than if they had a seizure disorder, blindness or any other illness. Depression is one of the mental illnesses that many of the people I know deal with. We talk at all hours of a day and sometimes, all we can do is cry. People will look at the depressed person and tell them to just "think happy thoughts" or "what do you have to be so sad about? There are lots of people that have it worse than you do." The cruelty of those statements make me cry. People don't choose to have depression, they don't want to sit up all night crying. The highs where you have plenty of energy, clean the house top to bottom then want to go out and see friends to the lows where you literally don't have the energy to get out of bed. Nobody chooses to live that way.

If you do seek treatment, either yourself or by being forced, it goes on "your record" forever. If you're looking for a new job, your potential employer will eventually find out and the odds are, you aren't getting a job. You have to worry that Children and Youth Services deciding that your mental illness is dangerous and will take your children away. Ex-husbands, ex-boyfriends, ex-girlfriends or just ex-friends can be vicious and use your mental illness to destroy your life. Posting on social media that you have this problem would be one way to hurt you.`

If you are applying for a concealed carry permit or handgun permit, the forms all ask if you've been committed either voluntarily or involuntarily for a mental illness and can and usually will deny your permit. With all the mass shootings going on, law enforcement is digging deeper into the shooters' background and splash it all over if the shooter had a mental illness. I don't understand why it's anyone else business about your health, but that is one thing people feel they have the right to tell the rest of the world about that.

The next time you see someone who suffers with depression or any other mental illness, maybe you should take the time to get to know them. They aren't monsters, they aren't their illness, but just people dealing with issues you are lucky enough not to. Talk to them, you might just learn something. 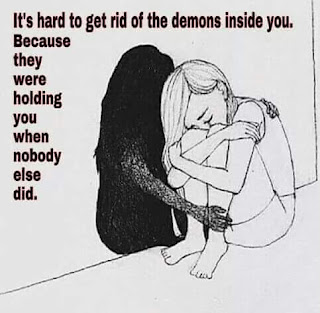