Back to Vampire Hours Again

Randy is on third shift again for a couple months, so other workers can get the training they need. I was use to having him here at night, so I was finally sleeping more than a few hours. Now I can't sleep again. I'm even watching reality TV because most other channels are on infomercials. Can you imagine how incredibly boring your life has to be to actually sit and watch those things? Even the mind-numbing reality TV is sometimes funny. It's obviously scripted. My new game is catching the oh-so-obvious scripting on them.

Third shift does have advantages though. We can schedule all my medical appointments and surgeries for his days off. He has every other weekend off as well as days during the week. That helps out a lot. He doesn't have to use vacation days or unpaid family medical leave. He's getting the injections in his knees the next three Fridays. This isn't the cortisone shots, but a thicker gel made out of rooster combs. The needles are thick and I can only imagine how painful it is getting them. The last series of injections had him obviously hurting and for a Marine who served in the first Persian Gulf War, showing anything hurts means I'd be curled up in a ball in the corner, unable to made a sound because I've already screamed my voice away. They work though. It kept him almost pain-free for months and even after a year, he was able to tolerate moving around. He's going to need to have knee replacement surgery in the future, but these injections are delaying that surgery. He's not even 50 yet and the surgery is usually meant for those over 60.

My left knee will have to be replaced again before I hit 50, I'm sure. I've had two meniscus tears in a year. The last surgery is my last chance. If I have another tear, that means that it has to be replaced. I'm trying to be very careful and not fall. I hold on better when I'm walking around. When I'm outside, I have a walking stick or use someone's arm to keep my steady. I feel more like I'm 90 because I can't just do things a normal woman my age doesn't even think about, she just does it. I have to consider everything I do and decide if it's worth the risk. Something as simple as going for a drive with my son for an on-line geocaching game takes so much energy and makes my left knee swells up that I can't do much the entire next day. At least I'm better off now than I was last year at this point after the first knee surgery. Have to be grateful for that, if nothing else.

Trevor graduated from Penn State last weekend. I was watching the video Arielle took with my Surface tablet. I can't believe my baby boy is a college graduate. He's sending out resumes to any business in San Diego, CA that needs computer technician help. He graduated with distinction and an impressive 3.85 GPA. I'm so proud of him. I don't know how I'll be able to handle it when the inevitable happens and he finds a job on the other side of the country. When we take him out there, he won't be coming back this time after a few weeks, he'll be living there. We're spending as much time together as we can. Since my left knee has no strength, I can't drive my Mustang. It's a standard and I can't push in the clutch, my beautiful Betty Lou is pure Detroit Muscle car and has a very stiff clutch. Trevor loves driving her, so we're putting a few miles on her. 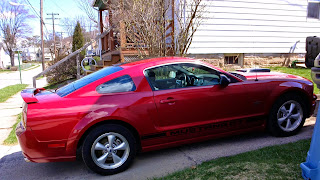 Time to find something new to watch. Hopefully, life will get a little better soon.