Another hospital in another State

This week started out so well, I should have known what was coming. I was happy and having fun. I was acting like a real human again. Time for the smackdown to begin.

My son just recently graduated with distinction from Penn State and had job interviews in San Diego. He asked me to fly out with him, just because I have never been to CA and things were so hard for me. Of course, I threw things in a bag and off we went. First problem hit, my wallet with ID and credit cards wasn't in my purse! I had my passport, so I could fly, but couldn't rent a car or check into a hotel! My daughter found the wallet and overnighted it to me. At that point, it didn't matter anymore.

We landed and fought to get a car rented and to our hotel. The hotel we reserved and paid in advance wasn't a hotel, but a HOSTEL. The difference? NO PRIVATE bathrooms. We would share one bathroom with a floor of people. Not this girl. When the clerk said that, all I saw was National Lampoon's European Vacation where the mom is in the tub and "Hagrid" Robbie Coltrane walks in. If you've seen the movie, you know the scene I'm talking about. No Hagrid for me. By that time, my son was screaming outside. I just run. He's holding his chest & can't breathe. Where is a hospital. The clerk didn't even look up as I begged for the way to a hospital. He simply couldn't have cared less, unless my son bled on the floor. It's pitchblack, 9 or so at night and I don't speak Spanish. Finally, a taxi driver took pity on me and we followed him to the trauma hospital. 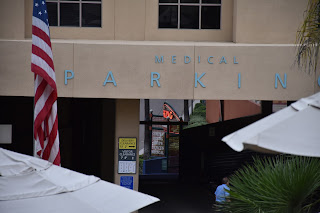 We should have been good, but remember, it's me. I'm 5'2" and my son is 6'3" and I'm trying to carry him in. Security wouldn't help, just said you have to go next door oh and move your car. Yeah, tow it, it's a rental. I manage to get to ER. Crying for someone to help my boy. They don't even blink when he's holding his chest and can't breathe. I tell them his lung collapsed. They don't care. Finally, I threaten to just take him and call 9-1-1. The snotty nurse tells me it's illegal and they would just send police to make me stop calling them. RIGHT! I happen to know a bit about the law after covering court for 20 years, but I let him think his smugness won. I was attracting enough attention by now that they take us back, but the doctor wouldn't even look at him until I PAID MY CO-PAY! My son can't breathe and they are hassling me for $25. I lost it then. After they had the cash, a nurse took his blood pressure and walked off. After 20 minutes of me crying and Trevor screaming in pain a doc sends him for a chest x-ray because I don't know what I'm talking about. How do I know his lung collapsed? This is his fourth collapse, I've been through this rodeo far too many times before. The x-ray shows a large collapse. Doc lets me see it and says I can take a photo of the x-ray. I bring out my pro camera (Nikon 5500) and she asks where is my camera phone. Please! I've written and taken photos my entire life. It's how I made a living. She's worried now about who I might be and calls in specialists because she just doesn't want to do it. I angered her by questioning her qualifications when she refused to listen to what my son and I were telling him was going on.

They arrive at 2 or 3 a.m. (remember, we got there at 10 p.m.) They see the x-ray and race him back to surgery. He's holding me, begging me not to leave him. What can I do? They won't let me go. I take the time to move the car and bring our gear. He's now on the trauma fl
oor. ER sends me to security. The same cop who saw me dragging my son in looks at me and says, "I won't tell you where your son is." WHAT? HELLO??? Remember me? Yes, did you move the car? Total ass. I'm hysterical, caring at least 150 pounds of junk and he wants to play. I tell them I KNOW the room he's in, I just don't know how to get there. He sighs and picks up the phone. Such hard work for such an easy job. The charge nurse tells him to send me right up. Finally, he tells me the elevators are at the end of the hall (about a football field away). Can you help me? NO!

Somehow I managed to get there and walk in the room. My boy is pale, with tubes and oxygen covering his body. I just broke down. Why him? Why again? He's here to get a job and start his life!

Several hours later, after the nurses ignored my questions on why so much blood from the tiny chest tube, the top cardiothoracic surgeon is in his room and says he has to go back to surgery right now. Why? He's bleeding into his chest and drowning. I could lose my baby! Of course, I agree to have it done. Then a nurse comes in, does he have a living will? I need to know what you want done if something goes wrong. He's only 20! This can't be happening, but it wasn't a nightmare, it was real. Of course, I told her to do everything possible to keep my boy alive, no matter what. Take my heart if he needs one, just save him.

His girlfriend Ana was there to hold me up or I literally would have curled up into a ball and just cried. I did lose it then, even with her there. I called my husband and said I need you now. He couldn't understand me because I was crying so hard. My mother and her sister drove him three hours to the nearest airport and he was on his way. It took many changes because of weather closing airports, but somehow, he managed to get here 24 hours after my hysterical call.

My son is getting better and should be getting the chest tubes out by tomorrow, then it'll be just slowly healing. This has taught me I'm stronger then I ever thought possible when all alone and push comes to shove. I need my husband and love him dearly, but I can survive.

If one person reads this and forgives a loved one, this pain is worth it. All we have are our family. Love them, no matter what. We can lose them far too soon and far too easily. My birthday is next week and we're making travel arrangements to get home. I hate the idea of doing that on my birthday, but then I realize what I could be making arrangements for instead and just say, "Thank You" for keeping my son alive.
Posted by Gretchen at 9:34 AM